For over a year, a diverse group of faculty, staff, and students across the Great Lakes Colleges Association have endeavored to build an interdisciplinary research and learning community between educational institutions. Our goal is to recast limiting notions of migration towards inclusive notions of mobility and movement. Mobility examines the processes, structure, and consequences of the movement of people, resources, commodities, and ideas. 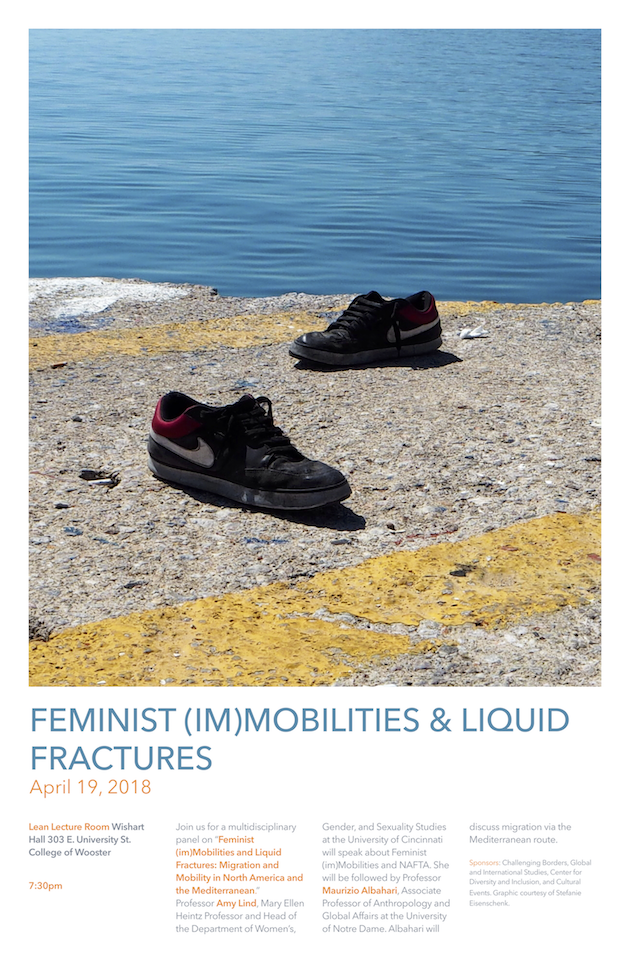 Continuing its commitment to “Challenging Borders” the College of Wooster will host a panel discussion on contemporary issues related to migration and the dynamic relationship between the mobility of people, ideas, and commodities. In this panel, we will focus on two geographies, North America and the Mediterranean. Our central question is how policies, histories, ideas, imaginations, and institutional structures have suppressed the movement of some and facilitated the movement of others. The panel discussion will be held in Wishart Hall, Lean Lecture Room at 7:30pm on April 19th. The event was free and open to the public and was also live-streamed. (The archive is here).

A “mobilities mindset” requires us to ask questions differently. Who gets to move? Who doesn’t move, and why? It asks us recognize (structural) power relationships that give rise to movement and lack of movement.

Movement is rooted in “particular times, places and local cultures” (Greenblatt, 2009). As such, we are focusing the panel discussion on the realities and discourses surrounding two borders, the US-Mexico Border and the (imagined) Mediterranean border between Europe and North Africa. Amy Lind will speak about Feminist (Im)mobilities, NAFTA, and the post-9/11 US-Mexico Border and Maurizio Albahari, will talk about migration via the Mediterranean route.

Dr. Lind is Mary Ellen Heintz Professor and Head of the Department of Women’s, Gender, and Sexuality Studies at the University of Cincinnati. She is the author of Gendered Paradoxes: Women’s Movements, State Restructuring, and Global Development in Ecuador (Penn State University Press, 2005), and editor of four volumes, including Feminist (Im)mobilities in Fortress(ing) North America: Rights, Citizenships and Identities in Transnational Perspective (Ashgate Publishing, 2013). This work engaged feminist scholars/activists from Mexico, Canada and the US, she will discuss how NAFTA has resulted in “mobile bodies” but immobile citizenships. Her work has been motivated by knowledge that “until recently, feminist knowledge production itself has often occurred through a nationalist lens which sometimes propagates, rather than questions, state power and global hegemonies”. (Runyan, Lind et al, 2016)

Maurizio Albahari is Associate Professor of Anthropology at the University of Notre Dame, where he is also concurrent Associate Professor in the Keough School of Global Affairs. He is the author of Crimes of Peace: Mediterranean Migrations at the World’s Deadliest Border (University of Pennsylvania Press, 2015). His articles and editorials on refugee mobility and related civic engagement in the Euro-Mediterranean context have appeared in interdisciplinary and news media venues including the Journal on Migration and Human Security, Social Research, Humanity, Anthropological Quarterly, History News Network, openDemocracy, Perspektif Magazine, Fox News, and CNN.

Dr. Albahari, in “After the Shipwreck..” argues that “Entrenched contradictions are likely to resurface in the Mediterranean.” When it comes to the European and global regulation of mobility (rather than commodities), the “neofeudal” dimension grasped by Carens (2012) is an especially apt qualifier. The neofeudal regime can only be implemented through the infrastructure of mass detention and removal,” amongst other political agreements and structures.(page 280). Albahari, like Lind, also questions his own position in the tragedies he reports on in the Mediterranean. “Through my research, I know that in order to unsettle civic apathy I need to represent migrants as they are, not as they are expected to be, which is often trafficked victims to be saved or grateful recipients of charity. How can I summon the memory of drowned lives in a way that goes beyond moral denunciation and personally redeeming gestures?

Please join us for what promises to be a provocative panel on April 19th, 2018. We thank our sponsors: the Cultural Events Committee, Center for Diversity and Inclusion, Global and International Studies, and the GLCA Challenging Borders Project.