Migration is a subject of great debate the world over. Perhaps the reason for controversy and debate has to do with how movement, which is central to migration, has been conceptualized and associated with imagined concepts like “home” and “host” which is further confused with the imagined community of nations. It doesn’t matter whether you are in Ghana discussing Liberian refugees, in Jordan talking about Palestinians, or in India discussing Hindu’s, Muslims or Kashmir, we are surrounded by narratives of difference. There is plenty of (scientific) evidence that suggests that difference is perhaps the wrong way to understand humanity. After all, Spencer Wells and plenty of other scientists, not to mention humanists, have shown we are all related. We have more in common than we care to admit. How does one bring people to this realization? Ribeiro and Fonseca (2011) write that: “Dance, an activity endowed with intentional expressivity and intrinsic affectivity” can be used to stimulate empathy. “When dancers improvise, they understand each other’s motor intentions and emotions. Thus, the dancers share decision making and build an ephemeral movement structure.”

Peter Pucci, an accomplished choreographer and the founder and director of Peter Pucci Plus Dancers, first investigated the intersection between migration and dance after hearing about the work of geneticist Spencer Wells on the history of migration in the world. Through research into DNA sequencing, Wells concluded that all modern-day humans share a common ancestor. Thus, individuals are not only 99.9% similar in terms of their DNA, but also have been in contact through historical movement of peoples over millennia. Pucci’s fascination with the relationship between migration and human relatedness became the driving force of his creation “Migration.” First performed in 2018 in Baltimore, “Migration” brought together 50 dancers consisting a mix of professionals and local high school and college students to “move together.” 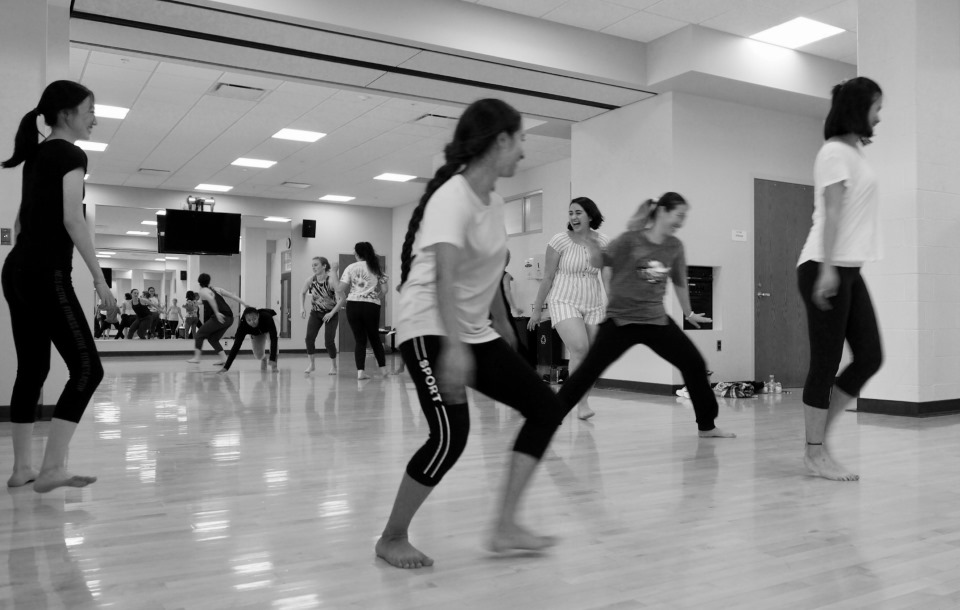 Meanwhile, a group of faculty members at The College of Wooster formed after the Faculty College of Mobility and Movement in 2018 were working on reconceptualizing migration. They were interested in building community and bridging divides. A body of research indicates that the use of dance and movement can be used to develop social bonds and mutual understanding. Sheppard and Broughton (2020) argue that dance participation improves social well-being, and Yamamoto (2015) shows that positive social change can be attributed to arts education. The Social Impact of the Arts Project (2002) demonstrates that community arts activities can reinvigorate communities. Moreover, Ribeiro and Fonseca (2010) explore how dance improvisation enables certain neurological processes allowing empathy among individuals. Given the potential of dance as a tool for community building, the collective energy of Laura Sirot, Amyaz Moledina, and Kim Tritt, later joined by Mareike Herrmann and Niklas Manz, proposed a kinetic experience to bring different groups closer together. Their goal was to merge perspectives and the movement of seemingly unrelated bodies in an collectively choregraphed ephemeral movement. The generous support from The College of Wooster’s President’s Office using funds from a Andrew W. Mellon Foundation Grant brought about the Migration and Dance project at The College of Wooster from September 6th to 14th in 2019.

Peter Pucci was invited to facilitate the week-long event given his interest in migration and movement along with his experience working with diverse groups of people of various ages and backgrounds. As Pucci puts it, “Inevitably, everyone that you’re working with is from somewhere else.” Just as you have an eclectic group of artists working together for the same production, from directors, performers, to light, set, and costumer designers, you have people from varying social-economic, political, and religious backgrounds working together in any given time no matter where you go. Everyone is constantly collaborating with everyone else.

In an interview with a student participant of the program, Sam Powers remarks that “A great way to get to know people is to move together.” Powers’ comment captures the sentiment of Migration and Dance as an interdisciplinary kinetic learning experience.

A diverse group of individuals were involved in the project. Participants included a group of volunteers and students and faculty of three different classes, including the Choreography class taught by professor Kim Tritt from the Theatre & Dance department, the Transnational Migration in Germany class taught by professor Mareike Herrmann of both the Film Studies and German & Russian Studies departments, and a First-Year-Seminar class taught by professor Niklas Manz from the Physics department. The collaborative efforts resulting from this event were showcased on the main stage of McGaw Chapel in an informal workshop performance on Saturday, September 14, 2019. The show featured the performance of nine movement pieces that were collaboratively choreographed over a week of rehearsals. Ending the showcase was an improvised piece titled “Migration Mashup” where all the participants spontaneously and organically choreographed their movements into a collective performance. While the audience enjoyed the performances on the stage, they also had the opportunity to learn about the work and the thought process that went into the performances through an open discussion with the performers.

In interviews with the participants during the event, the value of setting the stage for cross-disciplinary collaboration became evident (see video above). As Pucci mentions, “Everyone feels empowered… and connected to the process.” While Migration and Dance examined migration through movement, the event also went further. Themes that came up in the student reflections showcased in the video above echo the insights from the body of research on dance, empathy, and social well-being. For example, Ethan Samangy and Lijiayi Wang’s comments about “fun” and “friendships” reinforce Sheppard and Broughton’s (2020) argument that dance can improve social well-being. Crystal Sermon in her reflection mentions how she was able to explore other people’s natural movements and how this pushed her chorographically. Sermon’s point echoes Ribeiro and Fonseca’s (2010) idea that “In contemporary dance improvisation, dancers are simultaneously their own choreographers and their partners’ spectators. The dancers have to be aware of themselves and of their partners.” Jack Doughty reflects… “I don’t usually work too well with others necessarily; Or don’t open-myself-up like that, especially with dancing…At the end of the day, its pretty cool how you can spend so much time prepping for something… and turn it into something that is short, concise, and beautiful!” This illustrates Ribeiro and Fonseca’s point about overcoming (imaginary) limitations to create an ephemeral movement structure. Ensleigh Hollon also reflects, “Everyone is a dancer, even if they don’t think they are…. And can come together.” She points out, “Those different movements are our common denominator”. The takeaways from this kinetic learning experience were not only academic, but apply to everyday life. Perhaps, empathy built through movement is the key to move towards an imagined community that we all belong to, regardless of where we were born, how we look, or the place we call “home”.